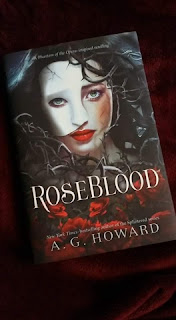 Summary: In this modern day spin on Leroux’s gothic tale of unrequited love turned to madness, seventeen-year-old Rune Germain has a mysterious affliction linked to her operatic talent, and a horrifying mistake she’s trying to hide. Hoping creative direction will help her, Rune’s mother sends her to a French arts conservatory for her senior year, located in an opera house rumored to have ties to The Phantom of the Opera.

At RoseBlood, Rune secretly befriends the masked Thorn—an elusive violinist who not only guides her musical transformation through dreams that seem more real than reality itself, but somehow knows who she is behind her own masks. As the two discover an otherworldly connection and a soul-deep romance blossoms, Thorn’s dark agenda comes to light and he’s forced to make a deadly choice: lead Rune to her destruction, or face the wrath of the phantom who has haunted the opera house for a century, and is the only father he’s ever known.

My opinion: I can tell I was so excited to read this book from my january Owlcrate box. The theme was Classic Remix and once I saw the book I was sooo happy because I am really fond of The Phantom Of The Opera - both, the film and the book. But maybe my expectations were a little bit too high.
As in the book Of Fire And Stars I read a few weeks ago, the story starts with a young lady - Rune -  who has a special gift. Or curse, however you might call it. Once she hears music she must sing, otherwise she becomes ill. But when she sings, she feels ill, too. Her mother doesn't know how to help her daughter and so she sends her off to a music school in France. RoseBood. I'm sorry, but that's a stupid name for a school, isn't it?
When Rune arrives at RoseBlood she soon sees a young boy who apparently isn't one of the students. Day by day she gets more nervous because she read that RoseBlood is built on the former place of the opera house of the real Phantom Of The Opera. Is it possible that the Phantom still lives? Maybe the Phantom want to lure her? Her school uniforms disappear and one evening, there is an invitation on her desk in the room. An invitation for an infamous rave club in Paris. People say that everyone who visits this club has lost memory of what has happened there...
But when she finally met Thorn, the young guy she suspected to be the Phantom earlier, everything changes. Rune and Thorn have a special connection at once but there is a problem. Erik, Thorns father, is the real Phantom and he needs Rune for a maniacal plan.

I like the idea of the story and the paranormal twist but there are also so many things I couldn't quite get along with. For example: Rune and Thorn often meet each other at the graveyard. Why for heavens sake is there a graveyard on the school area. There is no reason but making the story a little bit more creepy. Then Thorn wears a mask, like his father. But of course he has no scars or incinerations. He says it's better for him so everybody thinks he is the Phantom but he stays hidden like his father so it makes no sense for me. Then there are the new friends Rune get to know at RoseBlood. I like them very much, they are funny and understandable, BUT one of the names is Sunflower Summers. Even if it would be a stage name it would be horrible. She is called Sunny by her friends but sorry, that doesn't change anything. I know it's a dram but I can't get over it :D. And it's the same thing with the Phantom Of The Opera owning a rave club in Paris. A rave club? No! That simply doesn't fit for me. I know it is a modern retelling but it should match with the original figures.

Nevertheless the writing was beautiful. A.G. Howard has a talent for catching this especial atmosphere around the Phantom story.


He'd walked as a ghost in the gloomy bowels of this opera house for so Long, darkness had become his brother, which was fitting, since his father was the night, and sunlight their long forgotten friend.


She also did a lot of research for the book. I can't tell the ins and outs because I don't want to spoil anybody but she fugured out a lot about the role models for the original Phantom Of The Opera story and I really appreciate that. I also like Rune and Thorn as single characters. When they are together, it is a little bit too soppy for me. Even there, saying that they are meant for each other is not enough for me.

The title only fits because it's the name of Runes music school and as I said before, I don't know why a school needs such a terrible name. It's the same Thing with the cover. Why picture a girl with the mask of the Phantom. Maybe it should be Rune, but she never wears a mask in the book.

So you see, I am not quite happy with this book and I'm sooo sad about it. I wanted to like it :(
Did anybody recognize such problems after reading a book?

Would you read this book again? No, I don't think so.