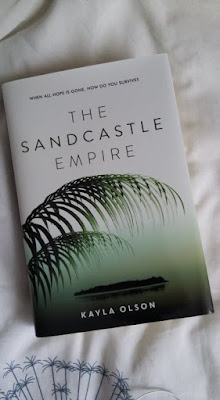 Summary: Before the war, Eden’s life was easy—air conditioning, ice cream, long days at the beach. Then the revolution happened, and everything changed.

Now a powerful group called the Wolfpack controls the earth and its resources. Eden has lost everything to them. They killed her family and her friends, destroyed her home, and imprisoned her. But Eden refuses to die by their hands. She knows the coordinates to the only neutral ground left in the world, a place called Sanctuary Island, and she is desperate to escape to its shores.

Eden finally reaches the island and meets others resistant to the Wolves. But their solace is short-lived when one of Eden’s new friends goes missing. Braving the jungle in search of their lost ally, they quickly discover Sanctuary is filled with lethal traps and an enemy they never expected.

This island might be deadlier than the world Eden left behind, but surviving it is the only thing that stands between her and freedom.


My opinion: While I loved reading New World, the other book that came with my Make it out alive Box from Owlcrate, I struggled a lot with this one. The story begins promising at the beach where Eden lives alone since a group called the Wolfpack rule the world in a very brutal way.After a short incident Eden finds herself on a boat off to freedom (at least she thought that). But she is not alone but with three other girls who managed to escape. Alexa, Hope and Finnley. All four seemed like characters with great potential. But sadly they all remain very facile. From time to time I got the impression all Alexa and Eden can think of is boys. At the same time I missed the worldbuilding. When they arrive at another island it seems to be a stereotype jungle with an old temple and suddenly three boys appear on the beach so the group is complete. And I also have an advice for all the dystopian authors: There are many more countries in this world than Amerika. It would make sense to consider them from time to time, so the story would become more complex.

The thing about setting a dystopia so close to modern day is that there are so many things to consider and Olson does neither of those. The author chooses the easy path instead and doesn't explain enough things for the Reader and a lot of things seemed to happen for no reason. Also the plot twists weren't big surprises for me.


All in all I just didn't care about the plot and the characters so the reading took me a very long time. I'm always sorry when I have to say something like this about a book but not every story is a good story. And as we know tastes can be different. I read a lot of positive reviews about this book.
So no recommendation from me but maybe you will like it though.


Would you read this book again? No I won't. And I won't read the second book of the series as well.
Eingestellt von Pilvi um 18:12 Keine Kommentare: Links zu diesem Post